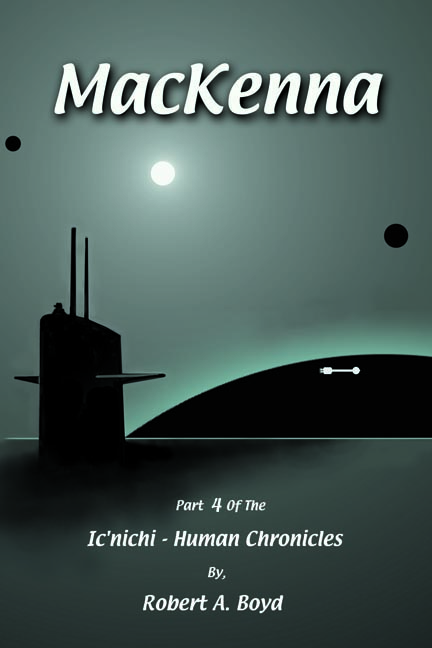 He was a statistical fluke...

...survivor of the high-tech terrors of global warfare, with more combat experience than any soldier in human history. They needed his dreadful skills once again, so they brought him back from the dead to fight the old wars in new form.

But they didn't think about what a lifetime of bloodshed does to a man.

They didn't understand that bringing him back to face his past was his unique Hell.

They didn't consider just who - and what - they were unleashing.

The Ic'nichi - Human Chronicles take a dark new turn in this, the Second History Of The Interstellar Concord. The time is twenty years and beyond the events of the First History. Relations between the Ic'nichi and humans are fairly stable, but now both races face new challenges from beyond the stars.

A human colony is under attack by aliens with awesome firepower. Fearing their advanced technology, the Ic'nichi bring the human Admiral Brian MacKenna, who commanded earth's tiny space fleet during the Contact Crisis, back from the dead. His mission: to save the defenseless colony which is being systematically destroyed. His chances for success: zero. His probable reward: to disappear as mysteriously as he arrived.

Trapped by his deeply ingrained sense of duty, hapless pawn of interstellar intrigue, and doubting his own identity, Mac is grimly determined to save the colonists rather than have their destruction on his conscience. His only weapons: seventy-five years of combat experience, and his own desperation.

This one has a peculiar background: I was corresponding several years ago with a respected agent in New York City, and while he thought my writing was adequate, he didn't like any of my available works at the time. So I sent him a list of possible novel ideas, one of which was a vague notion of a deceased supersoldier brought back from the dead. That got a nibble, leading to a brief initial treatment which tied the story to a minor character from my 'Diplomacy' series. It ultimately lead nowhere, but the seed was planted, and grew into this work - the beginning of a three part series in its own right. (It's odd how even minor elements of a story can sprout wings and take on a life of their own.) Like all my story ideas, this one evolved in the writing into something far more compelling than I would have imagined at the time. This is not a war story as such, nor is it an anti-war story, really. This is the raw, graphic story of the terrible human cost of war.